A GOOGLY IN THE COMPOUND

A Novel of the Raj

The Sanjanas planned to enjoy the tiger cub and surrender the adult to the zoo, but no plan had been made for the adolescent. The family is breakfasting in the compound of their bungalow when the cub gets its first taste of blood from a cut on Sohrab Sanjana’s hand. Also in attendance are Daisy (Sohrab’s English wife, married when she was stranded by WWII in India); Rustom (Sohrab’s brother, back from the war in Burma); Dolly (their mother, afraid the rivalry between her sons might erupt into violence echoing the rivalry between the two brothers she had married in succession); and Phiroze (Dolly’s second husband, younger brother of her first). Their story spans the years from 1910 to 1945, and the globe from rural Navsari to cosmopolitan Bombay to 1930s London to wartorn Burma and Mesopotamia. 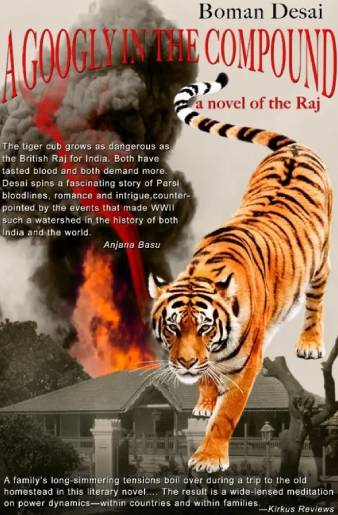 This engrossing chronicle of a complicated family builds to a stunner of a conclusion.

A "class" act of historical proportions, [the novel] rips into, and inverts, the conventional class hierarchies between the British and the Indians, upper-class Indians and lower.

Boman Desai's novel pulls the reader in and doesn't let go till the end.... A family secret lies at the heart of the story, but the periphery is no less exciting. Two lovers escape Stalin's Soviet Union to India and a soldier meets with tragedy during the Kut-al-amara campaign of the Great War in Mesopotamia.

Set against the backdrop of the last days of the Raj, Desai's novel is a story of family conflict and skeletons in the cupboard. Secrets jostle against secrets and the tiger cub grows as dangerous as the British Raj became for India. Both have tasted blood and both demand more. However, more dangerous than both the Raj and the tiger is another, older secret that lies at the heart of the Sanjana family. In his elaborate style, Desai spins a fascinating story of Parsi bloodlines, romance and intrigue, counterpointed by the events that made World War II such a watershed in the history of both India and the world.

The bare bones of the plot don't do justice to the theme, but the structure of the novel is fascinating. The entire story is wrapped around a single breakfast which takes place at the Sanjana residence at Navsari. The progress of the breakfast is broken into five sections each titled "Day of the Tiger." Desai skilfuly closes each section with a particular character who then narrates his or her story.

[A] deeply moving tale highlighting Parsi bloodlines against the backdrop of two world wars…. The unpredictability in the plot [transforms] the narrative into a page-turner. Brimming with history, this book is an exceptional read for fans of historical, and literary fiction.

My grandmother, who lived in Navsari, was a great storyteller. She was also one of the models for Dolly Sanjana. My brother and I grew up in Bombay, paying her annual visits, much like the Sanjana brothers. Before going to sleep, the three of us would lie together in her wide four-poster bed, mosquito netting pulled close, my grandmother in the middle, and she would launch into tales from the Ramayana, Mahabharata, Shah-Nama, Arabian Nights, Hans Christian Anderson, Brothers Grimm—or she would make up stories. She knew how to stretch a tale and conclude with a cliffhanger, much like Scheherazade, even without the threat of the sword of Damocles.

One of her stories was of a shikari who had bagged a maneater and brought home an orphaned cub to raise as a pet. The story ran much as it does in A Googly in the Compound. The shikari wakes from sleep to find the grown cub licking a cut on his hand. When he attempts to remove his hand, the cub growls, and the shikari realizes it may pounce, even maul, or kill him if he gets too proprietary about his hand—and calls his servant to shoot the cub without further ado.

The story stayed with me, becoming gnarled and tangled with time. The hunter developed into a solicitor and his family, the family developed a history, the servant developed a grudge, and I provided him with an opportunity to feed his grudge. I cannot say how many of my decisions were conscious and how many unconscious. I started with my grandmother's story of the shikari. I added a woman to complicate the issue between the servant and the master. I made her English to highlight the differences, not only between servant and master, but also between English and Indians.

The individual stories fell neatly into place once I had the long central scene settled. New episodes swam continually into the narrative as I turned to research the elements with which I was unfamiliar: astronomy, coelacanths, the Kut campaign, London between the wars, the communist party in India, the Silver Jubilee of George V, the Burma War and so on until the pattern became clear.

On a superficial level, this is a colonial novel, and colonialism may seem outdated in a postcolonial world—but on a more profound level, colonialism provides the clothing for themes of race and class, master and servant, cause and effect as ineluctably as post-colonialism. These are themes longer-lasting than their clothing, longer-lasting than either colonialism or post-colonialism. Colonialism is with us today, illustrated, among other things, by the unrepresentative incarceration of Blacks and Hispanics in the US, healthcare and tax systems unabashedly favoring the wealthy, bankers and brokers exonerated of grand larceny, and presidents of manslaughter in the name of war against countries helpless to assert their rights. 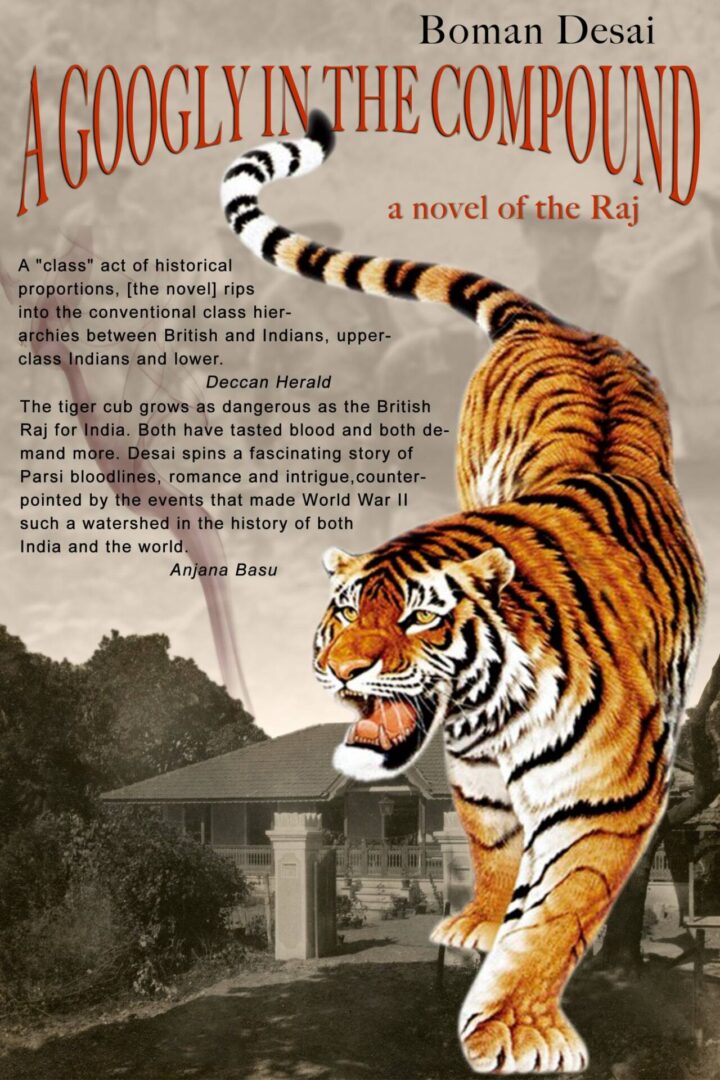 I initially chose this image of the tiger for the cover, but 4 people claimed copyright and I chose to purchase another instead. 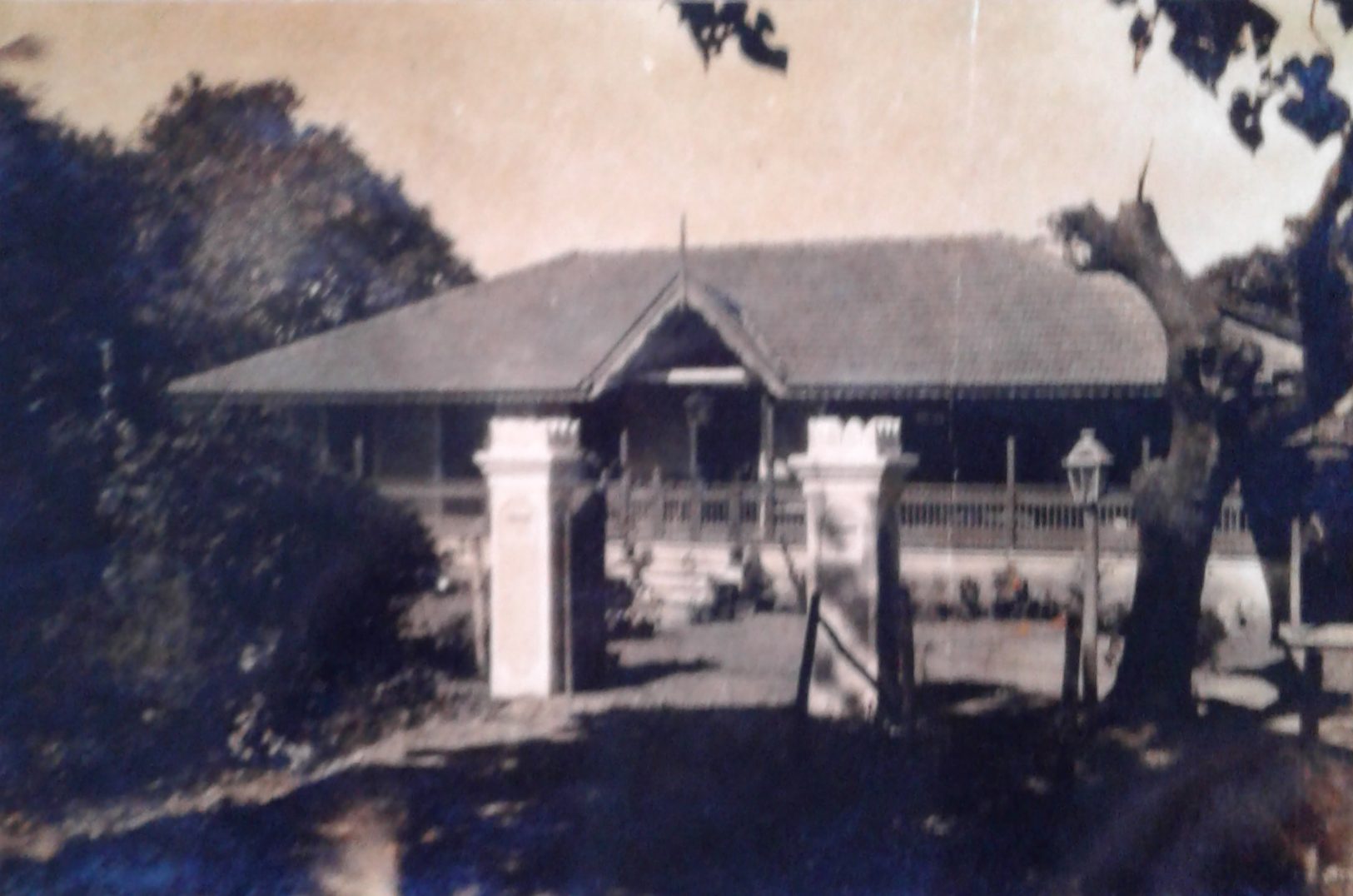 Truth Bungalow, my grandmother's house, behind which occurred the googly on which the novel pivots. No problems regarding this copyright: It's mine. 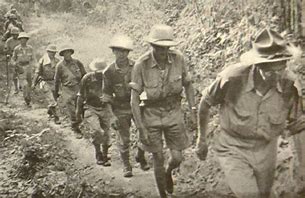 I wanted to use this snap on the cover, of the walkout from Burma led by General Stilwell (part of the story of the novel), but ran into copyright problems again and made do with the more generic image of smoke and flames.

The crowds had thinned when many British and Indians had turned west, some in the party suggesting they too should turn west, but Stilwell had continued north, transferring loads from sedans to trucks when the terrain had proven too rough for sedans, and from trucks to jeeps when they'd had to ford a stream and sacrifice most of the trucks. They'd had one narrow escape already. Taking two wrong turns they had lost miles when they couldn't afford to lose yards, and having corrected their path they had stopped to confirm their direction and found themselves overlooking a valley of roiling humanity.

At first it resembled nothing so much as a large snake coiling and uncoiling, but grew worse as details came clear: gray-uniformed Chinese dragged a Burman from the cab of his truck, slapped him with a pistol, bloodying his face, breaking his nose, commandeering his truck; blond Britishers struck unarmed families with the butts of their guns for bags of rice; tall gaunt Punjabis with long black beards snatched food from toothpick children; tribespeople looted bodies of the dead; heat waves magnified the disaster like a glass; the smell rose to grip them like a giant hand; someone fired a rifle, someone replied with a tommygun, then came screams, then more gunfire, then silence, first to fall were first to be trampled, women and children the fairest game of all.

They had hurried back to their convoy to find families of skeletons, grey with dust, holloweyed and leatherskinned, foul with shit and blood and flies, beyond the shame of their nakedness, crawling and rising from the ground, cracked cups and broken bowls in outstretched hands, babies sucking from dry dugs, children picking grains of rice from piles of shit. Stilwell had walked into the midst toward his jeep, shouting his concern out loud. "Hold it! Don't give them anything or we'll be mobbed! Crank up and get moving and don't stop for anything!" They started engines, honked horns, and hurried away.

Alphonse took two steps forward. He was close enough to touch Victoria when he steadied the gun, took aim again, and fired. In the wake of the blast there was once more the howling of monkeys, the screeching of fowl in the forest, but in the compound there was only a wide white silence, the sentient stillness of cemeteries awaiting the advent of ghosts, followed by an awful vibration riding the air, sweeping the grounds like a grating, atomizing all it swept, the savage roar of the tribe of tiger, Victoria erupting in an orange flame as if the ground were a bed of lava.

"It was on Christmas Eve, the Turks attacked our makeshift fort, and Rajan … at one point … he simply threw himself at me. I didn't understand, I hadn't seen the shell whistling its way toward …" Phiroze was once more speechless. Rajan had thrown him on his back and spreadeagled himself to cover him like a second skin—before growing suddenly weightless. His back had ripped open releasing fluids coagulating around Phiroze, encasing him in a gelatinous mold. He had tried to hold Rajan close, tried to hug him, but he had hugged bones, a ribcage clawing his chest, a skull like a lover's head lolling over his shoulder. The smell of shit was overpowering, but in that moment of sacrifice everything pertaining to Rajan became sacred, and he had breathed the odor as if to make it part of himself, wallowing in the clay that had once been his friend.

Phiroze swallowed, but still could not speak. Daisy squeezed his hand again, gripping and rubbing his arm, seeming to understand what he couldn't put into words. "My God, Phiroze, I'm so sorry. I'm so glad … I'm so grateful you're still here."

He shook his head, eyes glistening, speaking again though his voice still trembled. "I am the one who is sorry. All this happened so long ago, more than thirty years—and here I am, an old soldier, blubbering like a baby."